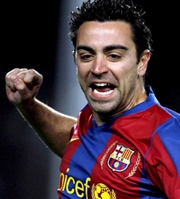 A difficult one to call after Spain won the 2008 European Championship, as the victory was a real team effort. Casillas, Sergio Ramos, Puyol, Iniesta, David Villa and Fernando Torres (to name but six) could all have been here.

But the Barcelona midfield general was the one who called the shots, and the media professionals agreed by naming him the player of the tournament. Xavi has a vision second to none when it comes to that defence splitting pass, but added to that you could count the times he loses possession on the fingers of one hand - and that is over a whole season!

If he has any weak spot that is the lack of goals, but as his team's dead-ball specialist he more than makes up for that with his assists, and in any case Spain has more than enough players who know the route to goal.

If "La Roja" do win through Xavi will surely have been the key man, although knowing the way he is he will be too modest to accept that. A genuine team player, and there are not may of those left in the world at his level. Watch and learn!