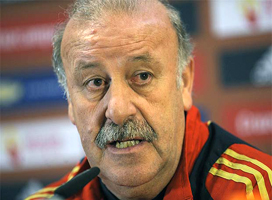 When Luis Aragonés was surprisingly let go following the Euro 2008 Championship win two years ago, it didn't take long for the Spanish Federation to decide on his replacement. Born 23rd December 1950, Vicente Del Bosque is a coach who, like Aragonés, has years of experience, and with a calm head on his shoulders he has continued in the line of his predecessor with a record second to none.

During his playing days, Del Bosque was a solid midfielder who spent most of his career at Real Madrid, winning four league titles and earning 18 caps for Spain. After he hung up his boots he continued on in Madrid's coaching staff, finally getting his chance to manage the first team when John Toshack was fired in the 1999/2000 season.

Del Bosque won the Champions League the same year and again two years later, and also won two leagues with the famous "Galacticos" before moving on in 2003. After periods at Besiktas and Cádiz he appeared to be heading for early retirement before he got the call from Spain. A World Cup title would be a fantastic way to round off his career.